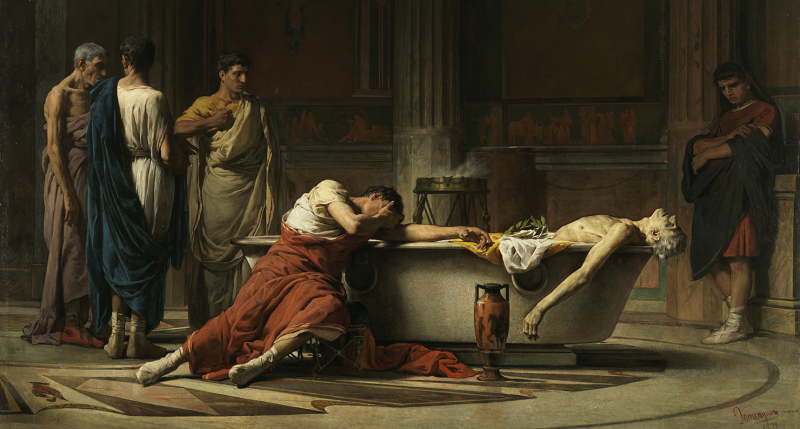 What we can learn from Seneca about dying well

As I’ve shared before, next to my bed at home I have a memento mori, an object to remind me before I go to sleep and when I get up that one day I will die. It kind of puts things in perspective.

“Study death always,” Seneca counseled his friend Lucilius, and he took his own advice. From what is likely his earliest work, the Consolation to Marcia (written around AD 40), to the magnum opus of his last years (63–65), the Moral Epistles, Seneca returned again and again to this theme. It crops up in the midst of unrelated discussions, as though never far from his mind; a ringing endorsement of rational suicide, for example, intrudes without warning into advice about keeping one’s temper, in On Anger. Examined together, Seneca’s thoughts organize themselves around a few key themes: the universality of death; its importance as life’s final and most defining rite of passage; its part in purely natural cycles and processes; and its ability to liberate us, by freeing souls from bodies or, in the case of suicide, to give us an escape from pain, from the degradation of enslavement, or from cruel kings and tyrants who might otherwise destroy our moral integrity.

Seneca was forced to take his own life by his own pupil, the more-than-a-little-crazy Roman Emperor, Nero. However, his whole life had been a preparation for such an eventuality.

Seneca, like many leading Romans of his day, found that larger moral framework in Stoicism, a Greek school of thought that had been imported to Rome in the preceding century and had begun to flourish there. The Stoics taught their followers to seek an inner kingdom, the kingdom of the mind, where adherence to virtue and contemplation of nature could bring happiness even to an abused slave, an impoverished exile, or a prisoner on the rack. Wealth and position were regarded by the Stoics as adiaphora, “indifferents,” conducing neither to happiness nor to its opposite. Freedom and health were desirable only in that they allowed one to keep one’s thoughts and ethical choices in harmony with Logos, the divine Reason that, in the Stoic view, ruled the cosmos and gave rise to all true happiness. If freedom were destroyed by a tyrant or health were forever compromised, such that the promptings of Reason could no longer be obeyed, then death might be preferable to life, and suicide, or self-euthanasia, might be justified.

Given that death is the last taboo in our society, it’s an interesting way to live your life. Being ready at any time to die, having lived a life that you’re satisfied with, seems like the right approach to me.