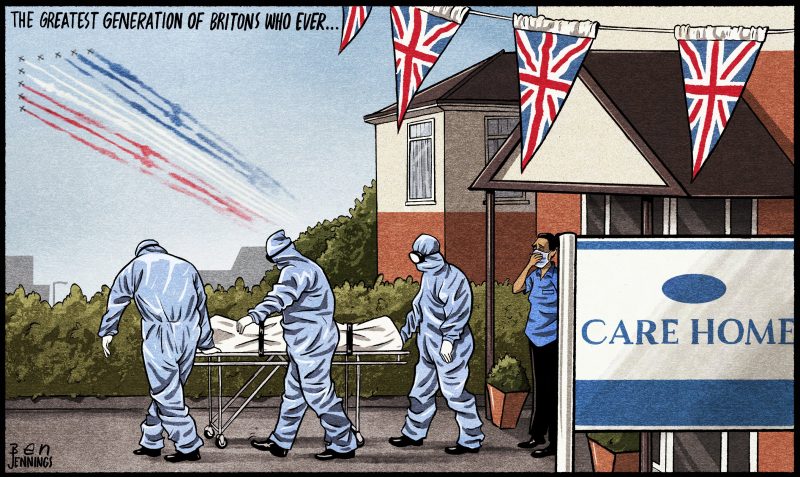 Having a Bank Holiday in the UK on a Friday has really thrown me this week. So apologies for this link roundup being a bit later than usual…

I do try to inject a little bit of positivity into these links every week, but the past few days have made me a little concerned about our post-pandemic future. Anyway, here goes…

This popped up in my Twitter feed this week and brought joy to my life. So simple but so effective: either randomly go to, or browse radio stations around the world. The one featured in the screenshot above is one close to me I forgot existed!

Every time we get a new kind of tool, we start by making the new thing fit the existing ways that we work, but then, over time, we change the work to fit the new tool. You’re used to making your metrics dashboard in PowerPoint, and then the cloud comes along and you can make it in Google Docs and everyone always has the latest version. But one day, you realise that the dashboard could be generated automatically and be a live webpage, and no-one needs to make those slides at all. Today, sometimes doing the meeting as a video call is a poor substitute for human interaction, but sometimes it’s like putting the slides in the cloud.

I don’t think we can know which is which right now, but we’re going through a vast, forced public experiment to find out which bits of human psychology will align with which kinds of tool, just as we did with SMS, email or indeed phone calls in previous generations.

An interesting post that both invokes ‘green eggs and ham’ as a metaphor, and includes an anecdote from an Ofcom report towards the end about a woman named Polly that no-one who does training or usability testing should ever forget.

I agree, although ‘subjectification’ is a really awkward word that suggests school subjects, which isn’t the author’s point. After all of this, I can’t see parents, in particular, accepting going back to how school has been. At least, I hope not.

This guide… is meant to give you hope and fear. To beat COVID-19 in a way that also protects our mental & financial health, we need optimism to create plans, and pessimism to create backup plans. As Gladys Bronwyn Stern once said, “The optimist invents the airplane and the pessimist the parachute.”

Modelling what happens next in terms of lockdowns, etc. is not an easy think to understand, and there are many competing opinions. This guide, with ‘playable simulations’ is the best thing I’ve seen so far, and I feel I’m much better prepared for the next decade (yes, you read that correctly).

Sheltering in Place with Montaigne

By the time Michel de Montaigne wrote “Of Experience,” the last entry in his third and final book of essays, the French statesman and author had weathered numerous outbreaks of plague (in 1585, while he was mayor of Bordeaux, a third of the population perished), political uprisings, the death of five daughters, and an onslaught of physical ailments, from rotting teeth to debilitating kidney stones.

The ubiquity of suffering heightened Montaigne’s attentiveness to the complexity of human experience. Pleasure, he contends, flows not from free rein but structure. The brevity of existence, he goes on, gives it a certain heft. Exertion, truth be told, is the best form of compensation. Time is slippery, the more reason to grab hold.

Montaigne is one of my favourite authors, and having recently read Stefan Zweig’s bioraphy of him, he feels even more relevant to our times.

There’s a children’s book that I love, The Greentail Mouse by Leo Lionni. It plays on the old theme of the town mouse and the country mouse. In this telling, the town mouse comes to visit his cousins in their rural idyll, and they ask him about life in the town. It’s horrible, he says, noisy and dangerous, but there is one day a year when it’s amazing, and that’s when carnival comes around. So the country mice decide to hold a carnival of their own: they make costumes and masks, they grunt and shriek and howl and jump around like wild things. But then, at some point, they forget that they are wearing masks; they end up believing that they are the fierce creatures they have been playing at being, and their formerly peaceful community becomes filled with fear, hatred and suspicion.

Dougald Hine is taking Charlie Davies’ course Clarity for Teachers and is blogging each day about it. This is from the last post in the series. I’m including it partly to point towards Homeward Bound, which I’ve just signed up for, and which starts next Thursday.

Give your video calls a makeover, with this selection of over 100 empty sets from the BBC Archive.

Who hasn’t wanted to host a pub quiz from the Queen Vic, conduct a job interview from the confines of Fletch’s cell, or catch up with friends and family from the bridge of the Liberator in Blake’s 7?

I love this idea, to spice up Zoom calls, etc.

First I search for my new item of interest, then I filter the results by “People I Follow.” (You can try it out with some of my recent searches: “Roger Angell,” “Captain Beefheart,” and “Rockford Files.”) Depending on the subject, I might have pages and pages of links, all handily selected for me by people I find interesting.

In his most recent newsletter, Austin Kleon referenced this post of his from five years ago. I think the idea is a great one and I’ll definitely be doing this in future! Twitter move settings around occasionally, but it’s still there under ‘search filters’.

Perhaps the most counter-intuitive truth of the universe is that the more you give to others, the more you’ll get. Understanding this is the beginning of wisdom.

Before you are old, attend as many funerals as you can bear, and listen. Nobody talks about the departed’s achievements. The only thing people will remember is what kind of person you were while you were achieving.

Over the long term, the future is decided by optimists. To be an optimist you don’t have to ignore all the many problems we create; you just have to imagine improving our capacity to solve problems.

The venerable KK is now 68 years of age and so has dispensed some wisdom. It’s a mixed bag, but I particularly liked these the three bits of advice I’ve quoted above.