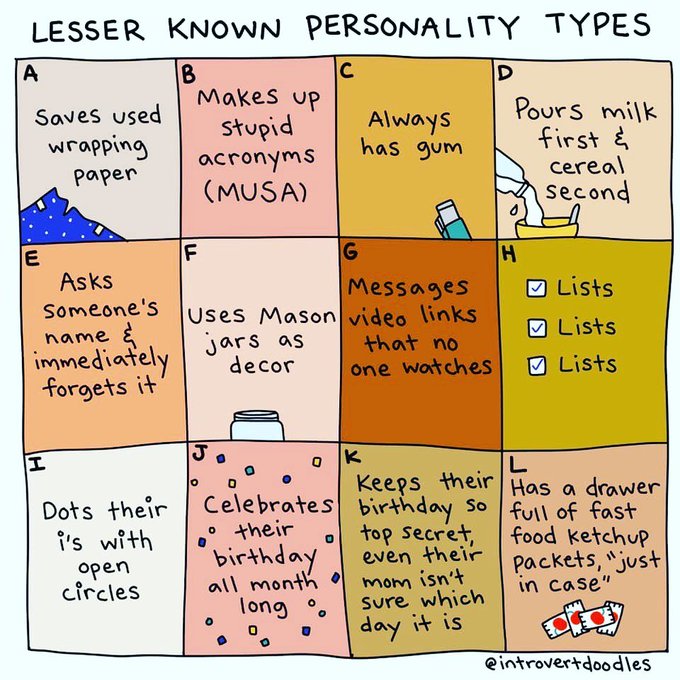 As usual, a mixed bag of goodies, just like you used to get from your favourite sweet shop as a kid. Except I don’t hold the bottom of the bag, so you get full value.

Let me know which you found tasty and which ones suck (if you’ll pardon the pun).

I don’t know… I think I’d like to say only that [young people] should learn to be alone and try to spend as much time as possible by themselves. I think one of the faults of young people today is that they try to come together around events that are noisy, almost aggressive at times. This desire to be together in order to not feel alone is an unfortunate symptom, in my opinion. Every person needs to learn from childhood how to spend time with oneself. That doesn’t mean he should be lonely, but that he shouldn’t grow bored with himself because people who grow bored in their own company seem to me in danger, from a self-esteem point of view.

This article in Open Culture quotes the film-maker Andrei Tarkovsky. Having just finished my first set of therapy sessions, I have to say that the metaphor of “puting on your own oxygen mask before helping others” would be a good takeaway from it. That sounds selfish, but as Tarkovsky points out here, other approaches can lead to the destruction of self-esteem.

[T]here are two sources of feeling like a noob: being stupid, and doing something novel. Our dislike of feeling like a noob is our brain telling us “Come on, come on, figure this out.” Which was the right thing to be thinking for most of human history. The life of hunter-gatherers was complex, but it didn’t change as much as life does now. They didn’t suddenly have to figure out what to do about cryptocurrency. So it made sense to be biased toward competence at existing problems over the discovery of new ones. It made sense for humans to dislike the feeling of being a noob, just as, in a world where food was scarce, it made sense for them to dislike the feeling of being hungry.

I’m not sure about the evolutionary framing, but there’s definitely something in this about having the confidence (and humility) to be a ‘noob’ and learn things as a beginner.

Imagine you were to take two identical twins and give them the same starter job, same manager, same skills, and the same personality. One competently does all of their work behind a veil of silence, not sharing good news, opportunities, or challenges, but just plugs away until asked for a status update. The other does the same level of work but communicates effectively, keeping their manager and stakeholders proactively informed. Which one is going to get the next opportunity for growth?

I absolutely love this post. As a Product Manager, I’ve been talking repeatedly recently about making our open-source project ‘legible’. As remote workers, that means over-communicating and, as pointed out in this post, being proactive in that communication. Highly recommended.

The Boomer Blockade: How One Generation Reshaped the Workforce and Left Everyone Behind

This is a profound trend. The average age of incoming CEOs for S&P 500 companies has increased about 14 years over the last 14 years

This means that the average birth year of a CEO has not budged since 2005. The best predictor of becoming a CEO of our most successful modern institutions?

Being a baby boomer.

Wow. This, via Marginal Revolution, pretty much speaks for itself.

Consider packing a suitcase for a trip. It contains many different items – clothes, toiletries, books, electrical items, maybe food and drink or gifts. Some of these items bear a relationship to others, for example underwear, and others are seemingly unrelated, for example a hair dryer. Each brings their own function, which has a separate existence and relates to other items outside of the case, but within the case, they form a new category, that of “items I need for my trip.” In this sense the suitcase resembles the ed tech field, or at least a gathering of ed tech individuals, for example at a conference

If you attend a chemistry conference and have lunch with strangers, it is highly likely they will nearly all have chemistry degrees and PhDs. This is not the case at an ed tech conference, where the lunch table might contain people with expertise in computer science, philosophy, psychology, art, history and engineering. This is a strength of the field. The chemistry conference suitcase then contains just socks (but of different types), but the ed tech suitcase contains many different items. In this perspective then the aim is not to make the items of the suitcase the same, but to find means by which they meet the overall aim of usefulness for your trip, and are not random items that won’t be needed. This suggests a different way of approaching ed tech beyond making it a discipline.

At the start of this year, it became (briefly) fashionable among ageing (mainly North American) men to state that they had “never been an edtech guy”. Follwed by something something pedagogy or something something people. In this post, Martin Weller uses a handy metaphor to explain that edtech may not be a discipline, but it’s a useful field (or area of focus) nonetheless.

Why Using WhatsApp is Dangerous

Backdoors are usually camouflaged as “accidental” security flaws. In the last year alone, 12 such flaws have been found in WhatsApp. Seven of them were critical – like the one that got Jeff Bezos. Some might tell you WhatsApp is still “very secure” despite having 7 backdoors exposed in the last 12 months, but that’s just statistically improbable.

Don’t let yourself be fooled by the tech equivalent of circus magicians who’d like to focus your attention on one isolated aspect all while performing their tricks elsewhere. They want you to think about end-to-end encryption as the only thing you have to look at for privacy. The reality is much more complicated.

Facebook products are bad for you, for society, and for the planet. Choose alternatives and encourage others to do likewise.

The current social-media model isn’t quite right for family sharing. Different generations tend to congregate in different places: Facebook is Boomer paradise, Instagram appeals to Millennials, TikTok is GenZ central. (WhatsApp has helped bridge the generational divide, but its focus on messaging is limiting.)

Updating family about a vacation across platforms—via Instagram stories or on Facebook, for example—might not always be appropriate. Do you really want your cubicle pal, your acquaintance from book club, and your high school frenemy to be looped in as well?

Some apps are just before their time. Take Path, for example, which my family used for almost the entire eight years it was around, from 2010 to 2018. The interface was great, the experience cosy, and the knowledge that you weren’t sharing with everyone outside of a close circle? Priceless.

While one data broker might only be able to tie my shopping behavior to something like my IP address, and another broker might only be able to tie it to my rough geolocation, that’s ultimately not much of an issue. What is an issue is what happens when those “anonymized” data points inevitably bleed out of the marketing ecosystem and someone even more nefarious uses it for, well, whatever—use your imagination. In other words, when one data broker springs a leak, it’s bad enough—but when dozens spring leaks over time, someone can piece that data together in a way that’s not only identifiable but chillingly accurate.

This idea of cumulative harm is a particularly difficult one to explain (and prove) not only in the world of data, but in every area of life.

Google recently invented a third way to track who you are and what you view on the web.

Each and every install of Chrome, since version 54, have generated a unique ID. Depending upon which settings you configure, the unique ID may be longer or shorter.

So every time you visit a Google web page or use a third party site which uses some Google resource, this ID is sent to Google and can be used to track which website or individual page you are viewing. As Google’s services such as scripts, captchas and fonts are used extensively on the most popular web sites, it’s likely that Google tracks most web pages you visit.

Use Firefox. Use multi-account containers and extensions that protect your privacy.

The Golden Age of the Internet and social media is over

In the last year I have seen more and more researchers like danah boyd suggesting that digital literacies are not enough. Given that some on the Internet have weaponized these tools, I believe she is right. Moving beyond digital literacies means thinking about the epistemology behind digital literacies and helping to “build the capacity to truly hear and embrace someone else’s perspective and teaching people to understand another’s view while also holding their view firm” (boyd, March 9, 2018). We can still rely on social media for our news but we really owe it to ourselves to do better in further developing digital literacies, and knowing that just because we have discussions through screens that we should not be so narcissistic to believe that we MUST be right or that the other person is simply an idiot.

I’d argue, as I did recently in this talk, that what Young and boyd are talking about here is actually a central tenet of digital literacies.