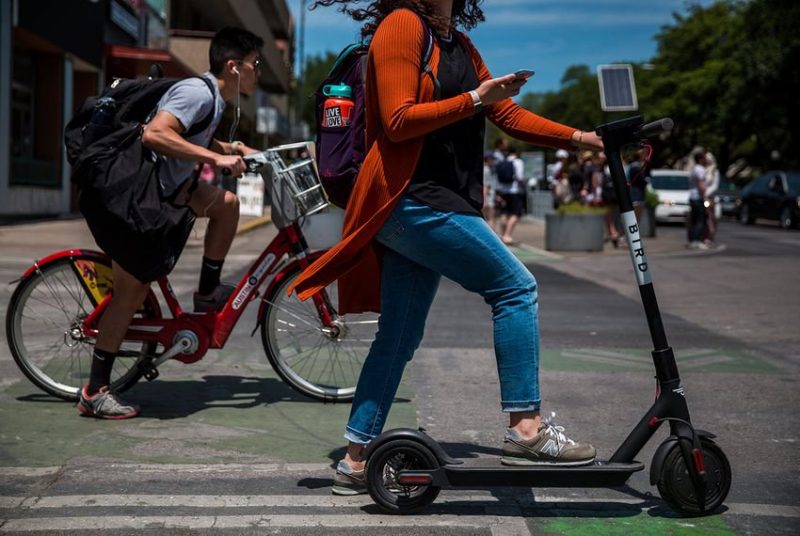 Life is like riding a bicycle. To keep your balance, you must keep moving

Thanks to Einstein for today’s quote-as-title. Having once again witnessed the joy of electric scooters in Lisbon recently, I thought I’d look at this trend of ‘micromobility’.

Let’s begin with Horace Dediu, who explains the term:

Simply, Micromobility promises to have the same effect on mobility as microcomputing had on computing. Bringing transportation to many more and allowing them to travel further and faster.  I use the term micromobility precisely because of the connotation with computing and the expansion of consumption but also because it focuses on the vehicle rather than the service. The vehicle is small, the service is vast.

Micromobility covers mainly electric scooters and (e-)bikes, which can be found in many of the cities I’ve visited over the past year. Not in the UK, though, where riding electric scooters is technically illegal. Why? Because of a 183 year-old law, explains Jeff Parsons Metro:

It’s only a matter of time, though, before legislation is passed to remove this anachronism. And, to be honest, I can’t imagine the police with their stretched resources pulling over anyone who’s using one sensibly.

Electric scooters in particular are great and, if you haven’t tried one, you should. Florent Crivello, one of Uber’s product managers, explains why they’re not just fun, but actually valuable:

You might be wondering about the third one of these, as I was. Crivello includes this chart:

Of course, as he points out, you can prevent cars running into scooters, bikes, and pedestrians by building separate lanes for them, with a high kerb in between. Countries that have done this, like the Netherlands, have seen a sharp decline in fatalities and injuries.

Despite the title, I’m focusing on electric scooters because of my enthusiasm for them and because of the huge growth since they became a thing about 18 months ago. Just look at this chart that Megan Rose Dickey includes in a recent TechCrunch article:

One of the biggest downsides to electric scooters at the moment, and one which threatens the whole idea of ‘micromobility’ is over-supply. As this photograph in an article by Alan Taylor for The Atlantic shows, this can quickly get out-of-hand when VC-backed companies are involved:

This can scare cities, who don’t know how to deal with these kinds of potential consequences. That’s why it’s refreshing to see Charlotte in North Carolina lead the way by partnering with Passport, a transportation logistics company. As John R. Quain reports for Digital Trends:

By tracking scooter rentals and coordinating it with other information about public transit routes, congestion, and parking information, Passport can report on where scooters and bikes tend to be idle, where they get the most use, and how they might be deployed to serve more people. Furthermore, rather than railing against escooters, such information can help a city encourage proper use and behavior.

I’m really quite excited about e-scooters, and can’t wait until I can buy and use one legally in the UK!