I’ve tried to include some links here to other things here, but just like all roads read to Rome, all links eventually point to the pandemic.

I hope you and people that you care about are well. Stay safe, stay indoors, and let me know which of the following resonate with you!

Our stories about where inventiveness comes from, and how the future will be made, overwhelmingly focus on the power of the individual. Such stories appeal to the desire for human perfection (and redemption?) recast in technological language, and they were integral to the way that late-19th-century inventor-entrepreneurs, such as Tesla or Thomas Edison, presented themselves to their publics. They’re still very much part of the narrative of technological entrepreneurism now. Just as Tesla wanted to be seen as a kind of superhero of invention, unbound by conventional restraints, so too do his contemporary admirers at the cutting edge of the tech world. Superheroes resonate within that culture precisely because they embody in themselves the perception of technology as something that belongs to powerful and iconoclastic individuals. They epitomise the idea that technological culture is driven by outsiders. The character of Iron Man makes this very clear: after all, he really is a tech entrepreneur, his superpowers the product of the enhanced body armour he wears.

A really interesting read about the link between individualism, superheroes, technology, and innovation.

The Second Golden Age of Blogging

Blogging was then diffused into social media, but now social media is so tribal and algo-regulated that anybody with a real message today needs their own property. At the same time, professional institutions are increasingly suffocated by older, rent-seeking incumbents and politically-correct upstarts using moralism as a career strategy. In such a context, blogging — if it is intelligent, courageous, and consistent — is currently one of the most reliable methods for intellectually sophisticated individuals to accrue social and cultural capital outside of institutions. (Youtube for the videographic, Instagram for the photographic, podcasting for the loquacious, but writing and therefore blogging for the most intellectually sophisticated.)

I’ve been blogging since around 2004, so for sixteen years, and through all of my career to date. It’s the best and most enjoyable thing about ‘work’.

NASA expected its probe, dubbed “the mole,” to dig its way through sand-like terrain. But because the Martian soil clumped together, the whole apparatus got stuck in place.

Programming InSight’s robotic arm to land down on the mole was a risky, last-resort maneuver, PopSci reports, because it risked damaging fragile power and communication lines that attached nearby. Thankfully, engineers spent a few months practicing in simulations before they made a real attempt.

The idea of NASA engineers sending a signal to a distant probe to get it to hit itself, in the midst of a crisis on earth, made me chuckle this week.

Act as if You’re Really There

Don’t turn your office into a generic TV backdrop. Video is boring enough. The more you remove from the frame, the less visual data you are providing about who you are, where you live, how you work, and what you care about. If you were watching a remote interview with, say, Bong Joon-ho (the South Korean director of Parasite) would you want him sitting on a blank set with a ficus plant? Of course not. You would want to see him in his real office or studio. What are the posters on his wall? The books on his shelf? Who are his influences?

Useful advice in this post from Douglas Rushkoff. I appreciate his reflection that, “every pixel is a chance to share information about your process and proclivities.”

On Twitter, people are finding ways to use the Zoom Rooms custom background feature to slap an image of themselves in their frames. You can record a short, looping video as your background, or take a photo of yourself looking particularly attentive, depending on the level of believability you’re going for. Zoom says it isn’t using any kind of video or audio analysis to track attention, so this is mostly for your human coworkers and boss’ sake. With one of these images on your background, you’re free to leave your seat and go make a sandwich while your boss thinks you’re still there paying attention:

As an amusing counterpoint to the above article, I find it funny that people are using video backgrounds in this way!

A Guide to Hosting Virtual Events with Zoom

There are lots of virtual event tools out there, like Google Hangouts, YouTube Live, Vimeo Live. For this guide I’ll delve into how to use Zoom specifically. However, a lot of the best practices explored here are broadly applicable to other tools. My goal is that reading this document will give you all the tools you need to be able to set up a meeting and host it on Zoom (or other platforms) in fun and interactive ways.

This is an incredible 28-page document that explains how to set up Zoom meetings for success. Highly recommended!

The rise of the bio-surveillance state

Elements of Asia’s bio-surveillance revolution may not be as far off as citizens of Western democracies assume. On 24 March an emergency bill, which would relax limits on urgent surveillance warrants, went before the House of Lords. In any case, Britain’s existing Investigatory Powers Act already allows the state to seize mobile data if national security justifies it. In another sign that a new era in data rights is dawning, the EU is reviewing its recent white paper on AI regulation and delaying a review of online privacy rules. Researchers in both Britain (Oxford) and the US (MIT) are developing virus-tracking apps inviting citizens to provide movement data voluntarily. How desperate would the search for “needles in haystacks” have to get for governments to make such submissions compulsory? Israel’s draconian new regulations – which allegedly include tapping phone cameras and microphones – show how far down this road even broadly Western democracies might go to save lives and economies.

We need urgent and immediate action around the current criss. But we also need safeguards and failsafes so that we don’t end up with post-pandemic authoritarian regimes.

The economy v our lives? It’s a false choice – and a deeply stupid one

Soon enough, as hospitals around the world overflow with coronavirus patients, exhausting doctors, nurses, orderlies, custodians, medical supplies, ventilators and hospital cash accounts, doctors will have to make moral choices about who lives or dies. We should not supersede their judgment based on a false choice. Economic depression will come, regardless of how many we let die. The question is how long and devastating it will be.

Not exactly a fun read, but the truth is the world’s economy is shafted no matter which way we look at it. And as I tweeted the other day, there’s no real thing that exists, objectively speaking called ‘the economy’ which is separate from human relationships.

How the Pandemic Will End

Pandemics can also catalyze social change. People, businesses, and institutions have been remarkably quick to adopt or call for practices that they might once have dragged their heels on, including working from home, conference-calling to accommodate people with disabilities, proper sick leave, and flexible child-care arrangements. “This is the first time in my lifetime that I’ve heard someone say, ‘Oh, if you’re sick, stay home,’” says Adia Benton, an anthropologist at Northwestern University. Perhaps the nation will learn that preparedness isn’t just about masks, vaccines, and tests, but also about fair labor policies and a stable and equal health-care system. Perhaps it will appreciate that health-care workers and public-health specialists compose America’s social immune system, and that this system has been suppressed.

Much of this is a bit depressing, but I’ve picked up on the more positive bit towards the end. See also the article I wrote earlier this week: People seem not to see that their opinion of the world is also a confession of character 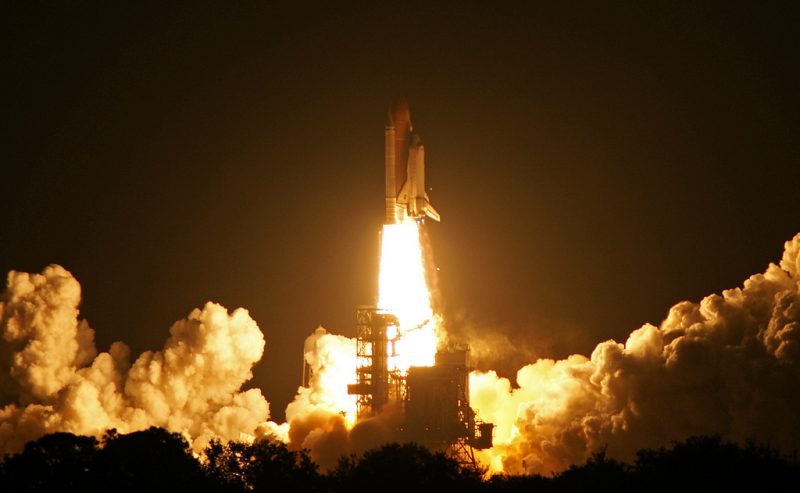 Why NASA is better than Facebook at writing software

Facebook’s motto, until recently, was “move fast and break things”. This chimed with a wider Silicon Valley brogrammer mentality of “f*ck it, ship it”.

NASA’s approach, as this (long-ish) Fast Company article explains, couldn’t be more different to the Silicon Valley narrative. The author, Charles Fishman, explains that the group who write the software for space shuttles are exceptional at what they do. And they don’t even start writing code until they’ve got a complete plan in place.

This software is the work of 260 women and men based in an anonymous office building across the street from the Johnson Space Center in Clear Lake, Texas, southeast of Houston. They work for the “on-board shuttle group,” a branch of Lockheed Martin Corps space mission systems division, and their prowess is world renowned: the shuttle software group is one of just four outfits in the world to win the coveted Level 5 ranking of the federal governments Software Engineering Institute (SEI) a measure of the sophistication and reliability of the way they do their work. In fact, the SEI based it standards in part from watching the on-board shuttle group do its work.

There’s an obvious impact, both in terms of financial and human cost, if something goes wrong with a shuttle. Imagine if we had these kinds of standards for the impact of social networks on the psychological health of citizens and democratic health of nations!

NASA knows how good the software has to be. Before every flight, Ted Keller, the senior technical manager of the on-board shuttle group, flies to Florida where he signs a document certifying that the software will not endanger the shuttle. If Keller can’t go, a formal line of succession dictates who can sign in his place.

Bill Pate, who’s worked on the space flight software over the last 22 years, [/url]says the group understands the stakes: “If the software isn’t perfect, some of the people we go to meetings with might die.

Software powers everything. It’s in your watch, your television, and your car. Yet the quality of most software is pretty poor.

“It’s like pre-Sumerian civilization,” says Brad Cox, who wrote the software for Steve Jobs NeXT computer and is a professor at George Mason University. “The way we build software is in the hunter-gatherer stage.”

John Munson, a software engineer and professor of computer science at the University of Idaho, is not quite so generous. “Cave art,” he says. “It’s primitive. We supposedly teach computer science. There’s no science here at all.”

The NASA team can sum-up their process in four propositions:

They don’t pull all-nighters. They don’t switch to the latest JavaScript library because it’s all over Hacker News. Everything is documented, and genealogy of the whole code is available to everyone working on it.

The most important things the shuttle group does — carefully planning the software in advance, writing no code until the design is complete, making no changes without supporting blueprints, keeping a completely accurate record of the code — are not expensive. The process isn’t even rocket science. Its standard practice in almost every engineering discipline except software engineering.

I’m going to be bearing this in mind as we build MoodleNet. We’ll have to be a bit more agile than NASA, of course. But planning and process is important stuff.