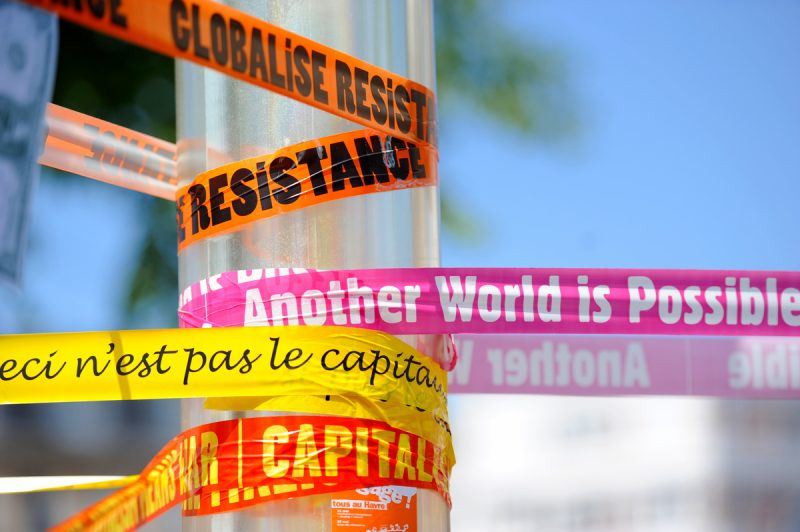 Neoliberalism in any guise is not the solution but the problem

Today’s quotation-as-title is from Nancy Fraser, whose short book The Old Is Dying and the New Cannot Be Born in turn gets its title from a quotation from Antonio Gramsci.

It’s an excellent book; quick to read, straight to the point, and it helped me to understand some of what is going on at the moment in both US and world politics.

First, let’s explain terms, as it is a book that presupposes some knowledge of political philosophy. ‘Neoliberalism’ isn’t an easy term to define, as its meaning has mutated over time, and it’s usually used in a derogatory way.

There’s a whole history of the term at Wikipedia, but I’ll use definitions from Investopedia and The Guardian:

Neoliberalism is a policy model—bridging politics, social studies, and economics—that seeks to transfer control of economic factors to the private sector from the public sector. It tends towards free-market capitalism and away from government spending, regulation, and public ownership.

In short, “neoliberalism” is not simply a name for pro-market policies, or for the compromises with finance capitalism made by failing social democratic parties. It is a name for a premise that, quietly, has come to regulate all we practise and believe: that competition is the only legitimate organising principle for human activity.

To me, it’s the reason why humans go out of their way to engineer situations where people and organisations are pitted against each other to compete for ‘awards’, no matter how made-up or paid-for they may be. It’s a way of framing society, human interactions, and reducing everything to $$$.

In that vein, the most recent issue of New Philosopher, features an essay by Warwick Smith where he uses the thought experiment of an AI ‘paperclip maximiser’. This runs amok and turns the entire universe into paperclips:

I recently heard Daniel Schmachtenberger taking this thought experiment in a very interesting direction by saying that human society is already the paperclip maximiser but instead of making paperclips we’re making dollars — which are primarily just zeroes and ones in bank databases. Our collective intelligence system has on overriding purpose: to turn everything into money — trees, labour, water… everything. It is also very good at learning how to learn and is extremely good at eliminating any threats.

This attempt to turn everything into money is basically the neoliberal project. What Nancy Fraser does is identify two different strains of neoliberalism, which she explains through the lenses of ‘distribution’ and ‘recognition’:

The difference between these two strands of neoliberalism, then, comes in the way that they recognise people. Note that the method of distribution remains the same:

The political universe that Trump upended was highly restrictive. It was built around the opposition between two versions of neoliberalism, distinguished chiefly on an axis of recognition. Granted, one could choose between multiculturalism and ethnonationalism. But one was stuck, either way, with financialization and deindustrialization. With the menu limited to progressive and reactionary neoliberalism, there was no force to oppose the decimation of working-class and middle-class standards of living. Antineoliberal projects were severely marginalized, if not simply excluded from the public sphere.

It’s as if the Overton Window of acceptable public political discourse served up a menu of only different flavours of neoliberalism:

Ideologies are oriented within a narrative that spans the past, present, and future. We can argue over visions of what education should look like within a society, for example, because we’re interested in how the next generation will turn out.

In Present Shock, Douglas Rushkoff explains that instead of shackling themselves to ideologies, Trump and other populist politicians take advantage of the 24/7 ‘always on’ media landscape to provide a constant knee-jerk presentism:

A presentist mediascape may prevent the construction of false and misleading narratives by elites who mean us no good, but it also tends to leave everyone looking for direction and responding or overresponding to every bump in the road.

What we’re witnessing is essentially the end of politics as we know it, says Rushkoff:

As a result, what used to be called statecraft devolves into a constant struggle with crisis management. Leaders cannot get on top of issues, much less ahead of them, as they instead seek merely to respond to the emerging chaos in a way that makes them look authoritative.

If we have no destination toward we are progressing, then the only thing that motivates our movement is to get away from something threatening. We move from problem to problem, avoiding calamity as best we can, our worldview increasingly characterized by a sense of panic.

Blatant shock is the only surefire strategy for gaining viewers in the now.

We might be witnessing the end of progressive neoliberalism, but it’s not as if that’s being replaced by anything different, anything better.

What, then, can we expect in the near term? Absent a secure hegemony, we face an unstable interregnum and the continuation of the political crisis. In this situation, the words of Gramsci ring true: “The old is dying and the new cannot be born; in this interregnum a great variety of morbid symptoms appear.”

No matter what the question is, neoliberalism is never the answer. The trouble, I think, is that two-dimensional diagrams of political options are far too simplistic:

For example, as Edurne Scott Loinaz shows, even within the Libertarian Left (the ‘lower left’) there are many different positions:

The Libertarian Left has perhaps the best to offer in terms of fighting neoliberalism and populists like Trump. The problem is unity, and use of language:

For the first time in my life, I’m actually somewhat fearful of what comes next, politically speaking. Are we going to end up with populists entrenching the authoritarian right, going back full circle to reactionary neoliberalism? Or does this current crisis mean that something new can emerge?