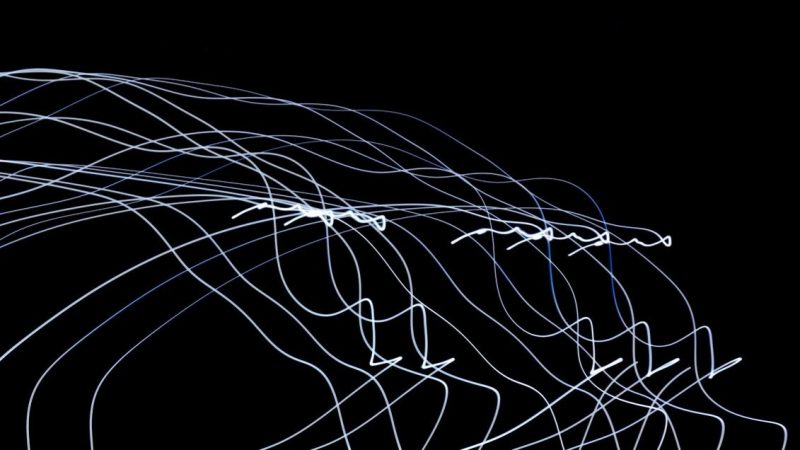 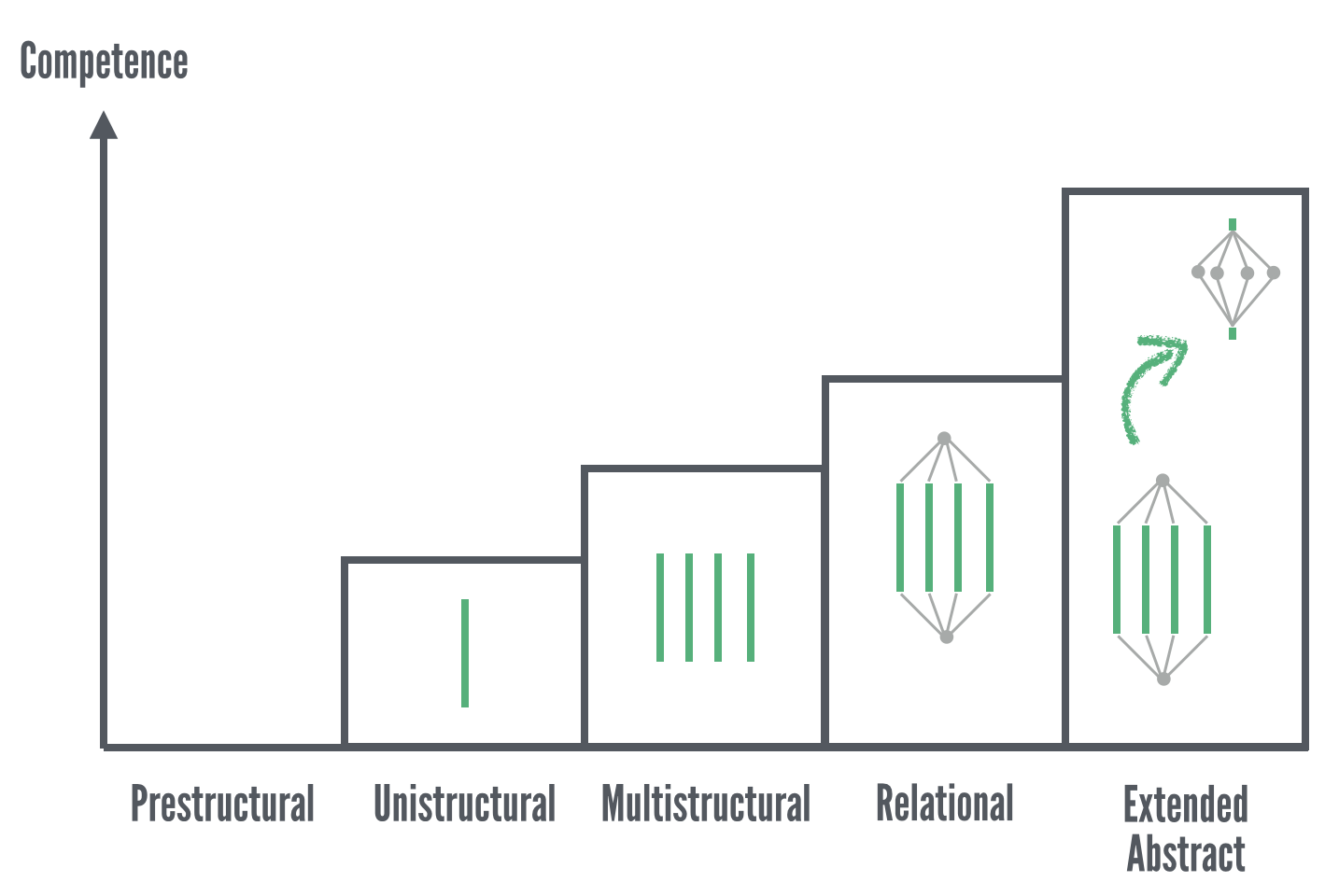 The drawbacks of Artificial Intelligence

It’s really interesting to do philosophical thought experiments with kids. For example, the trolley problem, a staple of undergradate Philosophy courses, is also accessible to children from a fairly young age.

You see a runaway trolley moving toward five tied-up (or otherwise incapacitated) people lying on the tracks. You are standing next to a lever that controls a switch. If you pull the lever, the trolley will be redirected onto a side track, and the five people on the main track will be saved. However, there is a single person lying on the side track. You have two options:

Which is the more ethical option?

With the advent of autonomous vehicles, these are no longer idle questions. The vehicles, which have to make split-second decision, may have to decide whether to hit a pram containing a baby, or swerve and hit a couple of pensioners. Due to cultural differences, even that’s not something that can be easily programmed, as the diagram below demonstrates. 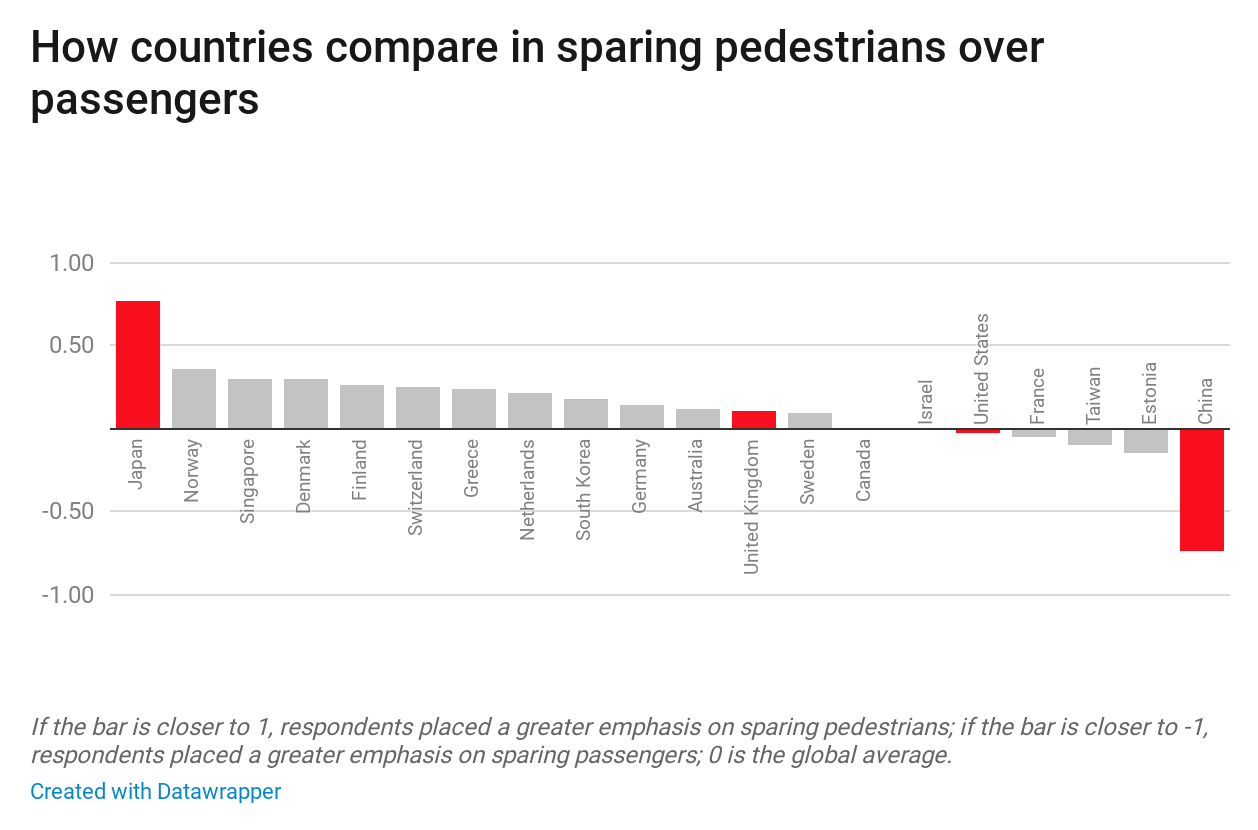 For two countries that are so close together, it’s really interesting that Japan and China are on the opposite ends of the spectrum when it comes to saving passengers or pedestrians!

The authors of the paper cited in the article are careful to point out that countries shouldn’t simply create laws based on popular opinion:

Edmond Awad, an author of the paper, brought up the social status comparison as an example. “It seems concerning that people found it okay to a significant degree to spare higher status over lower status,” he said. “It’s important to say, ‘Hey, we could quantify that’ instead of saying, ‘Oh, maybe we should use that.’” The results, he said, should be used by industry and government as a foundation for understanding how the public would react to the ethics of different design and policy decisions.

This is why we need more people with a background in the Humanities in tech, and be having a real conversation about ethics and AI.

Of course, that’s easier said than done, particularly when those companies who are in a position to make significant strides in this regard have near-monopolies in their field and are pulling in eye-watering amounts of money. A recent example of this, where Google convened an AI ethics committee was attacked as a smokescreen:

Academic Ben Wagner says tech’s enthusiasm for ethics paraphernalia is just “ethics washing,” a strategy to avoid government regulation. When researchers uncover new ways for technology to harm marginalized groups or infringe on civil liberties, tech companies can point to their boards and charters and say, “Look, we’re doing something.” It deflects criticism, and because the boards lack any power, it means the companies don’t change.

“It’s not that people are against governance bodies, but we have no transparency into how they’re built,” [Rumman] Chowdhury [a data scientist and lead for responsible AI at management consultancy Accenture] tells The Verge. With regard to Google’s most recent board, she says, “This board cannot make changes, it can just make suggestions. They can’t talk about it with the public. So what oversight capabilities do they have?”

As we saw around privacy, it takes a trusted multi-national body like the European Union to create a regulatory framework like GDPR for these issues. Thankfully, they’ve started that process by releasing guidelines containing seven requirements to create trustworthy AI:

The problem isn’t that people are going out of their way to build malevolent systems to rob us of our humanity. As usual, bad things happen because of more mundane requirements. For example, The Guardian has recently reported on concerns around predictive policing and hospitals using AI to predict everything from no-shows to risk of illness.

When we throw facial recognition into the mix, things get particularly scary. It’s all very well for Taylor Swift to use this technology to identify stalkers at her concerts, but given its massive drawbacks, perhaps we should restrict facial recognition somehow?

Human bias can seep into AI systems. Amazon abandoned a recruiting algorithm after it was shown to favor men’s resumes over women’s; researchers concluded an algorithm used in courtroom sentencing was more lenient to white people than to black people; a study found that mortgage algorithms discriminate against Latino and African American borrowers.

Facial recognition might be a cool way to unlock your phone, but the kind of micro-expressions that made for great television in the series Lie to Me is now easily exploited in what is expected to become a $20bn industry.

The difficult thing with all of this is that it’s very difficult for us as individuals to make a difference here. The problem needs to be tackled at a much higher level, as with GDPR. That will take time, and meanwhile the use of AI is exploding. Be careful out there.