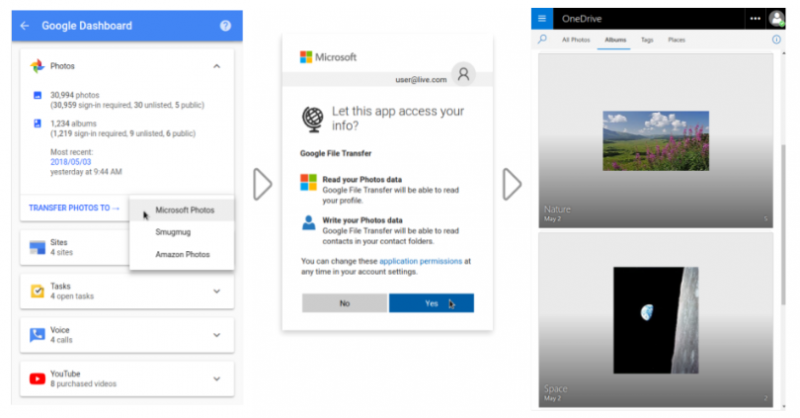 Data transfer as a ‘hedge’?

This is an interesting development:

Today, Google, Facebook, Microsoft, and Twitter joined to announce a new standards initiative called the Data Transfer Project, designed as a new way to move data between platforms. In a blog post, Google described the project as letting users “transfer data directly from one service to another, without needing to download and re-upload it.”

This, of course, would probably not have happened without GDPR. So how does it work?

The existing code for the project is available open-source on GitHub, along with a white paper describing its scope. Much of the codebase consists of “adapters” that can translate proprietary APIs into an interoperable transfer, making Instagram data workable for Flickr and vice versa. Between those adapters, engineers have also built a system to encrypt the data in transit, issuing forward-secret keys for each transaction. Notably, that system is focused on one-time transfers rather than the continuous interoperability enabled by many APIs.

I may be being cynical, but just because something is open source doesn’t mean that it’s a level playing field for everyone. In fact, I’d wager that this is large companies hedging against new entrants to the market.

The project was envisioned as an open-source standard, and many of the engineers involved say a broader shift in governance will be necessary if the standard is successful. “In the long term, we want there to be a consortium of industry leaders, consumer groups, government groups,” says Fair. “But until we have a reasonable critical mass, it’s not an interesting conversation.”

This would be great if it pans out in the way it’s presented in the article. My 20+ years experience on the web, however, would suggest otherwise.

Next LinkedIn: the game?