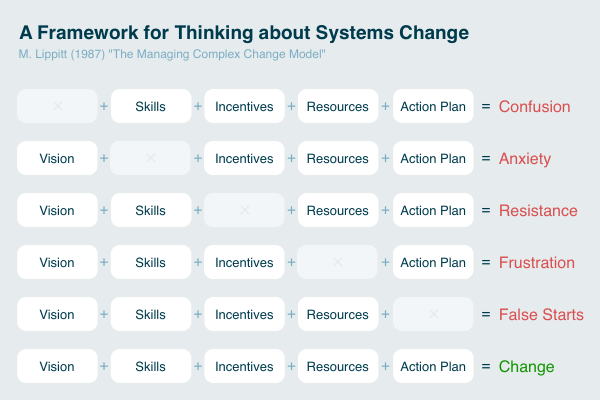 Over the last 15 years that I’ve been in the workplace, I’ve worked in a variety of organisations. One thing I’ve found is that those that are poor at change management are sub-standard in other ways. That makes sense, of course, because life = change.

There’s a whole host of ways to understand change within organisations. Some people seem to think that applying the same template everywhere leads to good outcomes. They’re often management consultants. Others think that every context is so different that you just have to go with your gut.

I’m of the opinion that there are heuristics we can use to make our lives easier. Yes, every situation and every organisation is different, but that doesn’t mean we can’t apply some rules of thumb. That’s why I like this ‘Managing Complex Change Model’ from Lippitt (1987), which I discovered by going down a rabbithole on a blog post from Tom Critchlow to a blog called ‘Intense Minimalism’.

The diagram, included above is commented upon by Davide ‘Folletto’ Casali, author of Intense Minimalism. Casali notes:

I’d perhaps use different words, as anxiety can be cause by a lot more than not having the skills within your team. But, otherwise, I think it’s a solid overview and good reminder of the fundamental building blocks to system change.

Next “You’re either a leader everywhere or nowhere”

Previous Finding friends and family without smartphones, maps, or GPS