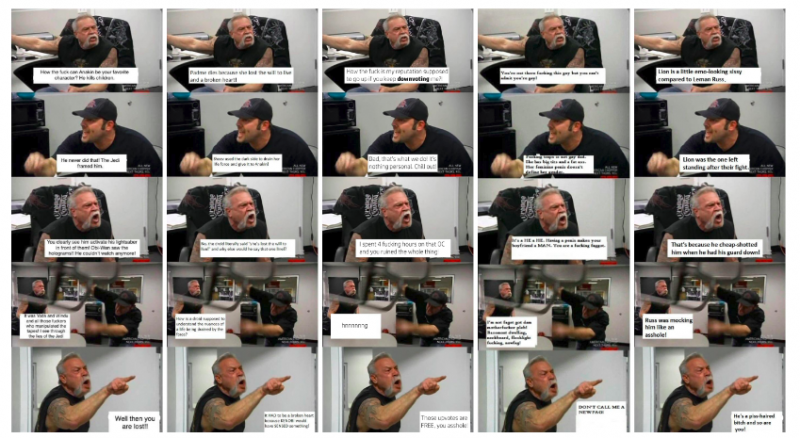 On the cultural value of memes

I’ve always been a big fan of memes. In fact, I discuss them in my thesis, ebook, and TEDx talk. This long-ish article from Jay Owens digs into their relationship with fake news and what he calls ‘post-authenticity’. What I’m really interested in, though, comes towards the end. He gets into the power of memes and why they’re the perfect form of online cultural expression.

So through humour, exaggeration, and irony — a truth emerges about how people are actually feeling. A truth that they may not have felt able to express straightforwardly. And there’s just as much, and potentially more, community present in these groups as in many of the more traditional civic-oriented groups Zuckerberg’s strategy may have had in mind.

The thing that can be missing from text-based interactions is empathy. The right kind of meme, however, speaks using images, words, but also to something else that a group have in common.

Meme formats — from this week’s American Chopper dialectic model to now classics like the “Exploding Brain,” “Distracted Boyfriend,” and “Tag Yourself” templates — are by their very nature iterative and quotable. That is how the meme functions, through reference to the original context and memes that have come before, coupled with creative remixing to speak to a particular audience, topic, or moment. Each new instance of a meme is thereby automatically familiar and recognisable. The format carries a meta-message to the audience: “This is familiar, not weird.” And the audience is prepared to know how to react: you like, you respond with laughter-referencing emoji, you tag your friends in the comments.

Let’s take this example, that Owens cites in the article. I sent it to my wife via Telegram, which an instant messaging app that we use as a permanent backchannel).

Her response, inevitably was: 😂

It’s funny because it’s true. But it also quickly communicates solidarity and empathy.

The format acts as a kind of Trojan horse, then, for sharing difficult feelings — because the format primes the audience to respond hospitably. There isn’t that moment of feeling stuck over how to respond to a friend’s emotional disclosure, because she hasn’t made the big statement directly, but instead through irony and cultural quotation — distancing herself from the topic through memes, typically by using stock photography (as Leigh Alexander notes) rather than anything as gauche as a picture of oneself. This enables you the viewer to sidestep the full intensity of it in your response, should you choose, but still, crucially, to respond). And also to DM your friend and ask, “Hey, are you alright?” and cut to the realtalk should you so choose to.

So, effectively, you can be communicating different things to different people. If, instead of sending the 90s kids image above directly to my wife via Telegram, I’d shared it to my Twitter followers, it may have elicited a different response. Some people would have liked and retweeted it, for sure, but someone who knows me well might ask if I’m OK. After all, there’s a subtext in there of feeling like you’re “stuck”.

Owens goes on to talk about how that memetic culture means that we’re living in a ‘post authentic’ world. But did such authenticity ever really exist?

So perhaps to say that this post-authentic moment is one of evolving, increasingly nuanced collective communication norms, able to operate with multi-layered recursive meanings and ironies in disposable pop culture content… is kind of cold comfort.

Nonetheless, author Robin Sloan described the genius of the “American Chopper” meme as being that “THIS IS THE ONLY MEME FORMAT THAT ACKNOWLEDGES THE EXISTENCE OF COMPETING INFORMATION, AND AS SUCH IT IS THE ONLY FORMAT SUITED TO THE COMPLEXITY OF OUR WORLD!”

Next You need more daylight to sleep better

Previous The résumé is a poor proxy for a human being