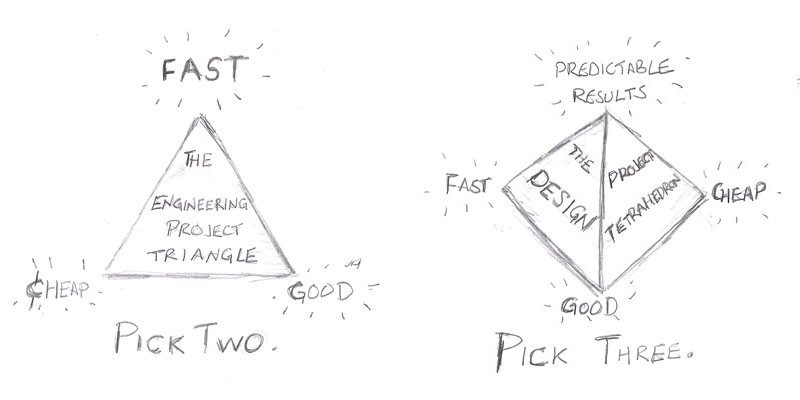 I had reason this week to revisit Dorian Taylor’s interview on Uses This. I fell into a rabbithole of his work, and came across a lengthy post he wrote back in 2014.

I’ve given considerable thought throughout my career to the problem of resource management as it pertains to the development of software, and I believe my conclusions are generalizable to all forms of work which is dominated by the gathering, concentration, and representation of information, rather than the transportation and arrangement of physical stuff. This includes creative work like writing a novel, painting a picture, or crafting a brand or marketing message. Work like this is heavy on design or problem-solving, with negligible physical implementation overhead. Stuff-based work, by contrast, has copious examples in mature industries like construction, manufacturing, resource extraction and logistics.

As you can see in the image above, he argues that the traditional engineering approach of having things either:

…is wrong, given a lean and iterative design process. You can actually make things that are immediately useful (i.e. ‘Good‘), relatively Cheap, and do so Fast. The thing you sacrifice in those situations, and hence the ‘tetrahedron’ is Predictable Results.

If you can reduce a process to an algorithm, then you can make extremely accurate predictions about the performance of that algorithm. Considerably more difficult, however, is defining an algorithm for defining algorithms. Sure, every real-world process has well-defined parts, and those can indeed be subjected to this kind of treatment. There is still, however, that unknown factor that makes problem-solving processes unpredictable.

In other words, we live in an unpredictable world, but we can still do awesome stuff. Nassim Nicholas Taleb would be proud.