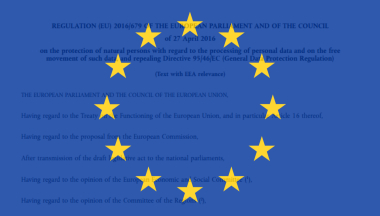 I have to say, I was quite dismissive of the impact of the EU’s General Data Protection Regulation (GDPR) when I first heard about it. I thought it was going to be another debacle like the ‘this website uses cookies’ thing.

However, I have to say I’m impressed with what’s going to happen in May. It’s going to have a worldwide impact, too — as this article explains:

For an even shorter tl;dr the [European Commission’s] theory is that consumer trust is essential to fostering growth in the digital economy. And it thinks trust can be won by giving users of digital services more information and greater control over how their data is used. Which is — frankly speaking — a pretty refreshing idea when you consider the clandestine data brokering that pervades the tech industry. Mass surveillance isn’t just something governments do.

[GDPR is] set to apply across the 28-Member State bloc as of May 25, 2018. That means EU countries are busy transposing it into national law via their own legislative updates (such as the UK’s new Data Protection Bill — yes, despite the fact the country is currently in the process of (br)exiting the EU, the government has nonetheless committed to implementing the regulation because it needs to keep EU-UK data flowing freely in the post-brexit future. Which gives an early indication of the pulling power of GDPR.

…and unlike other regulations, actually has some teeth:

The maximum fine that organizations can be hit with for the most serious infringements of the regulation is 4% of their global annual turnover (or €20M, whichever is greater). Though data protection agencies will of course be able to impose smaller fines too. And, indeed, there’s a tiered system of fines — with a lower level of penalties of up to 2% of global turnover (or €10M

I’m having conversations about it wherever I go, from my work at Moodle (an company headquartered in Australia) to the local Scouts.

Next Amazon Go, talent and labour