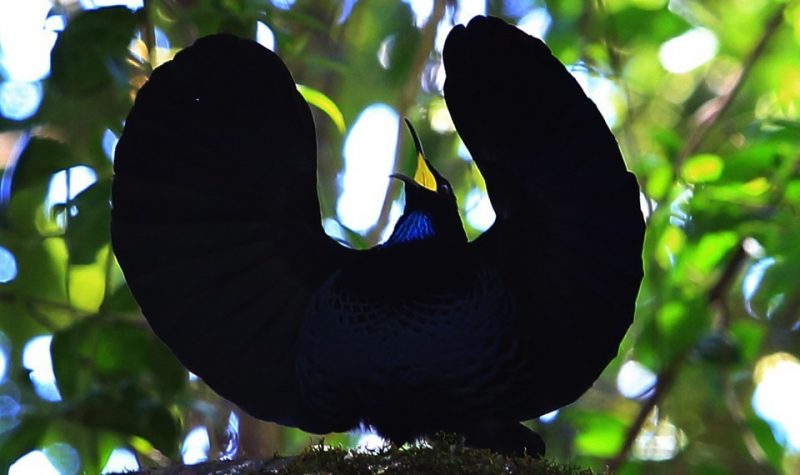 In a dark place

Last year, I remember being amazed by how black a new substance was that’s been created by scientists. Called Vantablack, it’s like a black hole for light:

Vantablack is genuinely amazing: It’s so good at absorbing light that if you move a laser onto it, the red dot disappears.

However, it turns out that Mother Nature already had that trick up her sleeve. Birds of Paradise have a similar ability:

A typical bird feather has a central shaft called a rachis. Thin branches, or barbs, sprout from the rachis, and even thinner branches—barbules—sprout from the barbs. The whole arrangement is flat, with the rachis, barbs, and barbules all lying on the same plane. The super-black feathers of birds of paradise, meanwhile, look very different. Their barbules, instead of lying flat, curve upward. And instead of being smooth cylinders, they are studded in minuscule spikes. “It’s hard to describe,” says McCoy. “It’s like a little bottle brush or a piece of coral.”

These unique structures excel at capturing light. When light hits a normal feather, it finds a series of horizontal surfaces, and can easily bounce off. But when light hits a super-black feather, it finds a tangled mess of mostly vertical surfaces. Instead of being reflected away, it bounces repeatedly between the barbules and their spikes. With each bounce, a little more of it gets absorbed. Light loses itself within the feathers.

Next Barcelona to go open source by 2019

Previous How to build a consensual social network